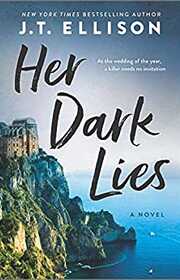 This book reminded me of a gothic novel. Taking place on an island in Italy during a storm and including a villa and family crypt, it was very atmospheric. I received an advanced reader's copy and couldn't stop reading, even though the key to the mystery was revealed early in the book. When Claire Hunter meets the rich Jack Compton, her life changes. Having led a tough teenage life and becoming involved with a criminal, she still feels guilt about the night her father was killed in a car accident that she caused.

When Jack arranges their wedding on the island where his family owns a villa, she's excited but somewhat overwhelmed. It doesn't help that the night before they leave for Italy, someone breaks into the house, and Claire kills the intruder in self defense. Her actions are covered up by the bodyguard who was meant to protect her and Jack. Trouble continues to follow them to the island as they prepare for their wedding, and the incoming storm adds to the mystery. Claire learns that many of the Compton wives died accidentally, including Jack's first wife, Morgan. The only difference is that Morgan's body has never been found, although when Jack and Claire arrive on the island, a body is discovered.

Secrets are revealed about Jack's family, but Claire, with her own secrets, still wants to marry Jack. After her wedding gown is ruined and people start being killed by unexplained accidents at the villa, Jack's mother moves up the wedding in the hope that whoever is trying to prevent it will stop after it has taken place. Unfortunately, the person behind the incidents has other plans.

Although I wasn't surprised at the ending, there was a twist. I really enjoyed this book, but I found it a bit too dark for my taste. The changing point of views, even of the person behind everything, added interest and insight to the characters. For those who enjoy dark fiction with a gothic feel, I would recommend this read.